It has been a while since we last released a sushi recipe, and with the changing of seasons we thought it would be a great time to get back to this with our low-carb/keto Spicy Tuna Sushi Rolls!

We actually have a whole series of low-carb/keto sushi recipes planned out, but so far we have only released our Bacon Wrapped California Rolls, Cucumber Philly Rolls, Keto Lobster Rolls, Keto Poor Man’s Sushi, Shrimp Bacon Rolls, and what should have been our Beef Sushi Rolls, but that ended in disaster and instead became our Beef Lettuce Hand Rolls!

We say ‘traditional fusion’ because it was one of the first fusion sushi to be created, but not what you’d call a ‘traditional’ sushi roll.

Anyway, going back to the recipe itself, spicy tuna is actually really simple and easy to make!  You start with your Yellowfin Tuna/Ahi, chop that up and mix it with some mayo, sesame oil, green onion and spices and out comes your spicy tuna mix!

Wrap that bad boy up with some cucumber and Soy Paper and your have yourself a Keto Spicy Tuna Sushi Rolls!  All at only 3g of net carbs per 12 pieces!

And if you’re wondering, the reason we opt to use Soy Paper rather than seaweed is becasue once the seaweed gets wet from the spicy tuna mix, it becomes soggy and undesirable.  If you prefer, you definitely can still use seaweed, but juts make sure you eat it right away so it doesn’t get a chance to become soggy.

So next time you are in the mood for sushi – low-carb/keto style – give this LCA’s favorite sushi recipe a try!

For this recipe, the special ingredients you would need to pick up are Soy Paper, Sriracha, Sesame Oil, Kewpie Mayo, Toasted Sesame Seed (optional), Togarashi and sushi/sashimi grade tuna.  You can pick up most of these on Amazon or a local Asian supermarket.

Note – for the tuna, we recommend using Yellowfin Tuna/Ahi for this recipe.  You can use either fresh or frozen/saku blocks but just make sure it does state ‘sushi/sashimi grade’ on the package.  Bluefin Tuna/Hon Maguro is considered a premium tuna and an overkill to use for spicy tuna.

1) Gather all the ingredients.  Note – Kewpie Mayo not pictured.

2) Finely mince Yellowfin Tuna and place into a small mixing bowl.  Do NOT use a food processor as the tuna will become too mushy.

5) Cut ends off of cucumber.  Now slice cucumber long ways making 2 halves.  Cut halves into 1/4’s making four longs sticks from each half as shown below.  Set aside.

6) Fill a small bowl with water.  You will be using it to seal the roll.

7) Take a Soy Paper and place it horizontally.  Place about 3 tbsp spicy tuna mixture across the center followed by sticks of cucumber.  Make sure not to overfill or the roll will not seal.

8) Dip your finger in the small bowl of water and wet across the farthest edge away from you.

9) To roll, grab the edge of the soy paper closest to you, keeping the fillings in place with your fingers, roll it into a tight cylinder.

If you’re looking for other recipe ideas, be sure to check out our growing Recipe Index full of Asian inspired recipes! 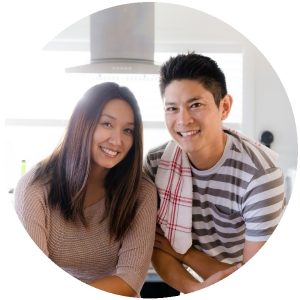 Welcome to LCA! Here you will find Easy Keto and Low Carb recipes from around the world that we love to make and eat in our everyday life. Come and join us on our culinary journey! Our Journey>>